GARTEL’s ART BASEL MIAMI 2011 partnership with Bang & Olufsen, a Danish-founded audio-visual company, led to fantastic original works inspired by the creative interaction of sight and sound. In the 1920s, Peter Bang and Svend Olufsen were technological pioneers in sound recording and signal transmission, much like GARTEL followed as a 1970s pioneer of the digital era of art.

B&O products are known for distinctive design, compared to mainstream rivals, because they hire independent designers rather than employ them in the company. GARTEL is still “making waves,” partnering for a unique Art Basel multimedia exhibition ” CYMATICS” that continues for the rest of this season, making good use of B&O’s supersized 3-D screens.

This year Laurence Gartel’s Art Basel Miami 2011 presentation “Cymatics” takes place at Bang & Olufsen Miami Beach Showroom. The exhibit, which extends through March 3rd, 2012, includes fantastic original works inspired by the creative interaction of sight and sound. In the 1920s, Peter Bang and Svend Olufsen were technological pioneers in sound recording and signal transmission. Gartel followed as a 1970s multimedia pioneer of the Digital Art era.Be a part of the unveiling of Bang & Olufsen’s new Beovision 4-103inch, 3-D High Definition, Plasma Television, valued at $130,000.00. Imagine feeling totally absorbed and a part of the action in your favorite 3D film. Bang & Olufsen will take you there with their new 3D technology.

In addition to the video/animation, time based work, the impresario of Digital Media will have additional surprises; with the unveiling of his latest Rolls Royce “1989 Themed” Spirit art car. Art historian Pierre Restany once declared Gartel a “Fabulist,” in his Introduction to the Italian monograph, “Gartel: Arte e Tecnologia.” Mr Gartel will once again live up to that title. Coming off hosting the Star Gala and creating the official artwork for the event honoring John Secada the show should prove to be another stellar star event. Artist website: gartelmuseum.weebly.com

Be part of The V.I.P. Red Carpet event where Lucky Strike will be serving passed hor d’oeuvres, Zacappa will be sharing their elixser from the gods and Russian Standard beauties will be passing their tempting libations. This event will be filmed and simulcast to the Intl Art Convention of Rome, Italy. 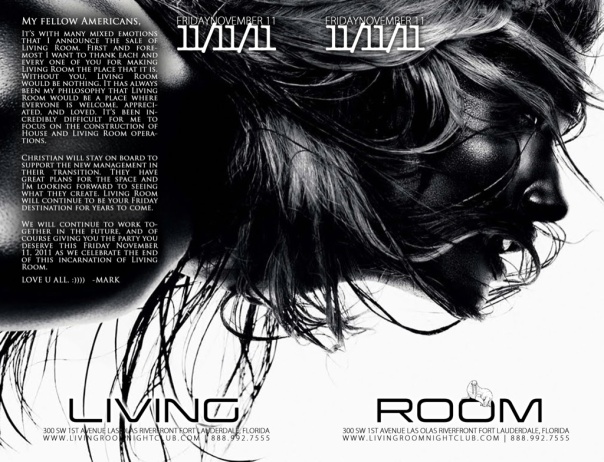 In June of 2008 I was introduced to Mark Lowe & Christian Leonard by my dear friend Elon Ka.

Plans for a revolutionary and visionary nightclub never seen before in South Florida were in the works, and a top secret space was being transformed behind the scenes.

As Teaser ads circulated all over South Florida Media outlets a few months later, speculation on how the brand new nightclub would fare in downtown Fort Lauderdale, a space that had become almost vacant and rarely frequented. Rumors and catcalls swirled throughout the club chatrooms and forums claiming that the club would not last 3 months.

Alot of the nightlife scene had become stagnant in South Florida for both the GLBT/Alternative community as well as the Mainstream markets. People were bored, and were looking for something new.

As I geared up for what would promise to be one my most prolific and high profile residencies of my career, the buzz surrounding LIVING ROOM NIGHTCLUB was extraordinary. Our Grand opening Night Broke all expectations and Thousands of eager and curious nightclub aficionados rushed the space for what would be the beginning of an evolution in nightlife like South Florida had never seen.

I can not describe the feeling when we opened our doors and Thousands of people rushed in to see the Gorgeous high art moodscape based space that can only be described as an organic living breathing work of art , The Brainchild of Mark Lowe who up to that point had an amazing carreer as an industrial designer and architect.   LIVING ROOM NIGHTCLUB faced all odds and delivered. An unstoppable force , we contined to change the scope and raise the bar on a weekly basis, breaking ground over and over again and setting a new standard on what nightclub goers should expect along with an unprecedented level of customer service, top notch entertainment and mindblowing themes.

For 3 years I have held my residency and experienced what a REAL party was all about, Ive met thousands of people, rubbed elbows with a plethora of celebrities and have a bevy of cherished memories that I will take with me for the rest of my days.

I want to thank everyone for their loyalty, support, and patronage on this journey. To all the staff Members, peers, bartenders, barbacks, security, Door personnel, my divas, our VIP hosts, Fellow DJs, Live Singers, promoters and everyone who has ever had a role in making LIVING ROOM NIGHTCLUB the number 1 nightclub in South Florida.  Thank you.

A Special Thank you to Elon and Mark for allowing me to grow creatively and to show the world what I was capable of and growing artistically every step of the way.    I invite everyone to come out tonight 11-11-11. 11:11:11  to Toast to 3 years of stellar entertainment and memories.

One Door to a LIVING ROOM May Close, but a gateway to an entire HOUSE awaits….More info coming soon!